Only one Trevor Morley Charles Watts managed to get a fantastic source and that was Brian Tevreden - Brian obviously liked Watts a lot and I note the exclusive interviews with him were still conducted by Watts even when he had moved on to do his Arsenal thing.

I remember Liam Moore tweeting him when he said he was leaving the post saying he knew more about his transfer saga than Moore did and that was down to Brian.

It seems to me that J-LOW hasn't been able to nurture the same relationship and I suspect the arrival of Ron Gourlay has made us more circumspect just as we were under Hammond...

I think the stuff directed at Jonathan Low is uncalled for. Its clearly been a steep learning curve and being the reporter for the local club comnes with a level of exposure which is different to just being a wider journo on a local rag. Recent stuff has been much better. The inexcusable mangling of language has gone. I think what is missing is the ability to think more laterally to develop a story - I'd be all over the down grading of Madjeski story if I was him (Madjeski never one to shy away from a quote) or trying to get Ron to do an interview about his thoughts for the club). Or getting Lee Herron to do an interview on how the academy is developing and his thoughts on the new players coming through.... rather than just waiting for the latest twitter rumour to pop up.

This seems very fair. mentioned about the Tevreden/Watts thing - was slightly weird how when Watts came back to do the P/O final it was accompanied by an exclusive Tevreden interview, and mentioned it at the time.

I think you're right in that if BT isn't being so open with him, he needs to find a new angle. Can't see Stam being particularly open with him on transfers, though he did do a couple of good interviews with him in Holland. Academy would be a good start

Definite improvements from JLow this season, and some reasonably interesting interviews on GR today with Gourlay and BT

Hound Definite improvements from JLow this season, and some reasonably interesting interviews on GR today with Gourlay and BT

He's out the front of the town hall with Gourlay, BriTev, a few fans in full kit, a whole load of stewards and two rows of blue chairs right now. Have I missed a memo somewhere? Genuinely looks like they're about to have an RFC themed game of musical chairs.

The row of chairs are positioned back to back (!?) and there's one random one next to the door facing in another entirely different direction. 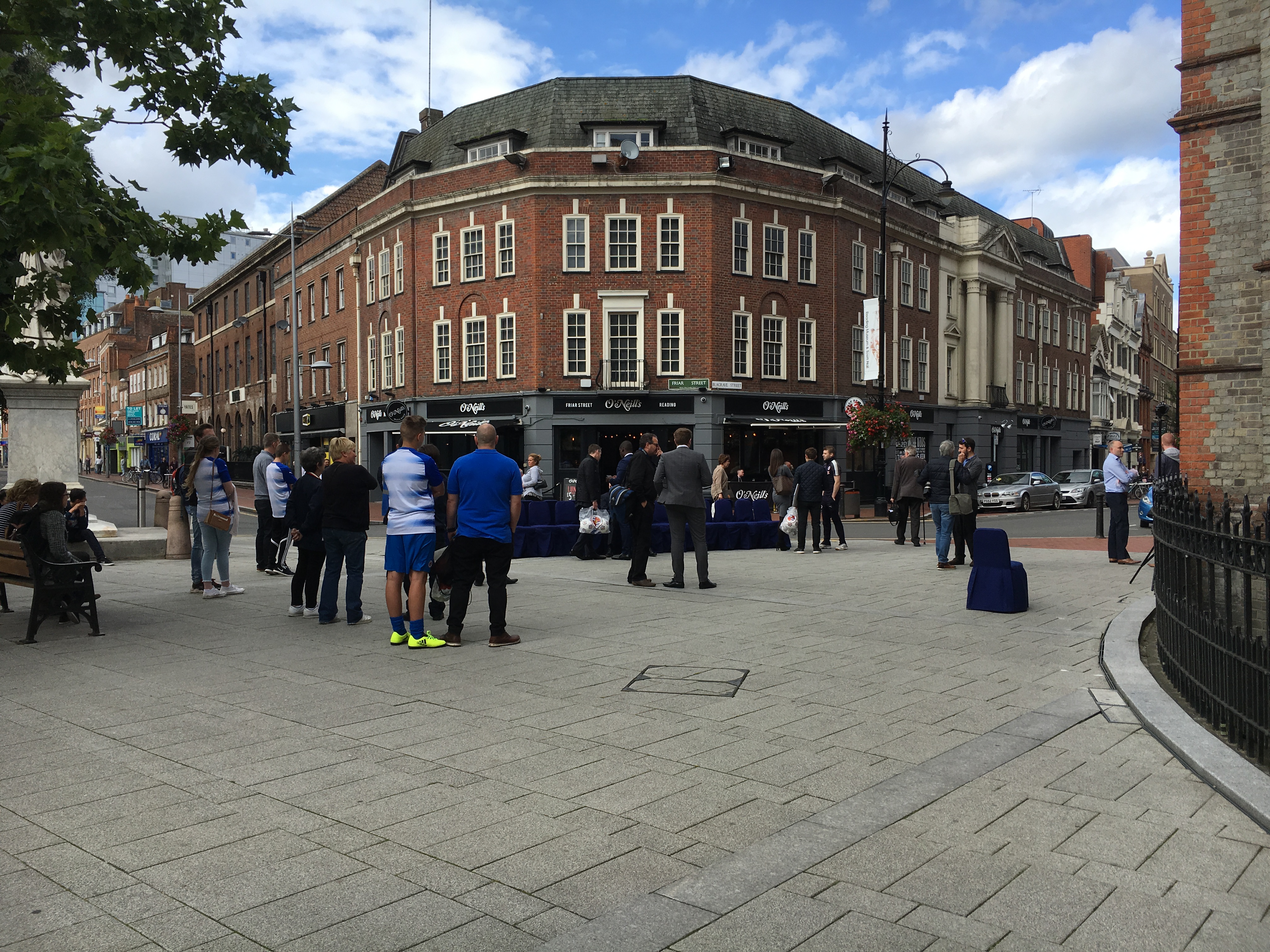 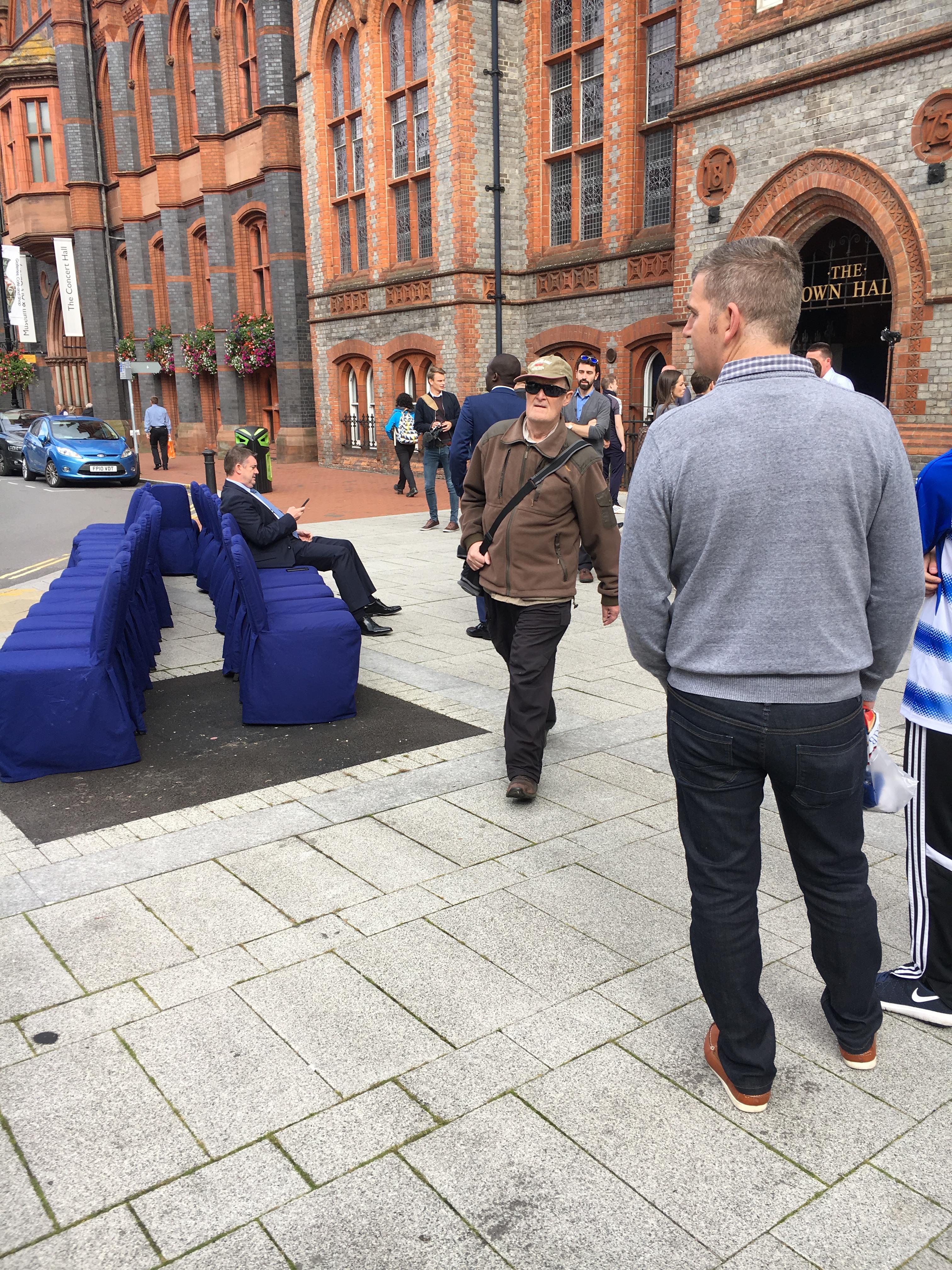 Yeah it was the team photo

Guessing the full kit boys got some sort of competition win to appear in a team photo. I hope so anyway.

I still wouldn't though. Be excruciating standing their pretending to be a player, whilst the rest of them want to pi$$ off and play on their playstations or whatever it is footballers do with themselves

Hound Definite improvements from JLow this season, and some reasonably interesting interviews on GR today with Gourlay and BT

Agreed, JLow has improved ten fold and I am absolutely delighted for him.

But....who is this utter bellend by the name of Courtney Friday or something like that. Some condescending tweets about club and even players but then has audacity to moan about them if they do not give an interview.

Agree about JLow and he's retained his dignity and professionalism throughout people calling him a "twat" and to "just resign". Good on him.

Love the team pics in town and last year in Forbury. Much much better than an empty Stadium shot

EDIT: yea I don't follow Courtney Friday but see a lot of his tweets on the #readingfc hashtag and sometimes people who retweet him. He does come across like a d1ck

that Friday bloke is the Chron reporter isn't he? Agree not a big fan.

Hopefully JL can continue his upward curve and start getting a few more interviews and contacts. Does come across as a decent chap, certainly handled the abuse well, but now needs to start 'breaking' some news. Hopefully that will come.

Preferred the team photo by the big Lion, but good on them for again doing it in town

Are they reenacting the blood test scene from John Carpenters 1982 visceral classic The Thing?

Guessing the full kit boys got some sort of competition win to appear in a team photo. I hope so anyway.

Yep it's winners of some competition. Be a nice photo to have I guess. If you're into that kind of thing.

I've heard from a reliable source that next years photograph is outside the back of the Broad Street Mall. Just near to TK Maxx

Two more clangers at the weekend by Courtney

He needs to stop reporting every little whisper he hears

Just when I though J-Low was finally getting to grips with being an RFC journo he drops a clanger on an article about Kermorgant's return saying he picked up an injury in pre-season. I was under the impression he had an operation during post season 2016-17.

Users browsing this forum: No registered users and 125 guests